Design Thinking in Everything. 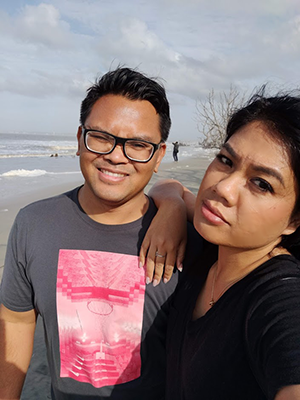 I'm a UX engineer that incorporates design thinking in all steps of development. What vision the team decides in the research phase with market validation and ideas, I make sure to keep as a backdrop while I work with the stakeholders to sketch solutions and iterate through learning and prototypes. After user testing and confirming product validation, I will transfer the vision from the ideation/learning phase into hi-fidelity prototypes and ultimately work directly with engineers to incorporate the prototypes directly into Angular or React, ensuring responsive design and compatibility with any window size and modern device.

I remember the itch started when I was a kindergartner drawing every moment I could get. During middle school, I found Microsoft Paint on Windows 3.1 and I knew I wanted to do something with art because I thought my pixelated Star Destroyer was the best thing I've ever made!

As I got into my teens, I wanted to be an "Architect" which quickly faded into "Industrial Designer." As you can see, I had pretty lofty dreams. You could probably guess that by the time I went to University, I would easily choose Graphic Design as my major.

Yay, I graduated! First job? Web Design. Wait a sec, this isn't what I signed up for. I was told to learn CSS by reading this tiny green CSS essentials book on my flight from Florida to California, where I would spend the next few years developing websites for the first time in my life. Learn, I did, during the Second Browser War (2004-2017). It was bloody! Not everybody could say "My soul was forged in the bowels of hell & Internet Explorer hacks," but I survived, with battle scars.

Upon reading the infamous usability book: Steve Krug's Don't Make Me Think 2nd Edition, I realized I was doing this stuff naturally. Everything made sense. It was great for applying fundamental HCI design principles to the page, but it still wasn't the full picture that I thought I saw at the time.

Upon learning about UX design principles and further more Lean UX, was when I began to really understand the process as a whole.
Everything changed when I began to apply design thinking to all aspects of my developing understanding of the design process.

Taking what I've learned in the workplace as allowed me to apply the process in everyday things. It's not just making things pretty, even though that's a fun part of it. It's actually the process asking "Why?" Why do things do the things they do. It's the process of improving something whether it be user interfaces, processes, or even improving yourself such as, deciding to say random positive things to your wife, or deciding to spend that extra bit of time explaining things to your daughters. :) They really do ask a lot of questions!. It could be anything really, but the takeaway is that the thing you're improving has inherently increased value for those that interact with it.

So, now I'm at a point in life where I want to practice what I've learned to the fullest degree, to grow and find new experiences along the way.

I want to use Design Thinking in everything.